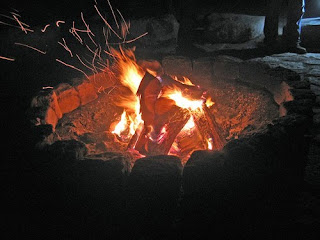 photo by wharman
News Release: Ministry of Forests and Range

New regulations that shrink the size of legal campfires will come into effect July 1 to reduce the risk of human-caused wildfires, Forests and Range Minister Pat Bell announced today.

“As we head into peak camping season, I want to remind people that more than 850 fires resulted from careless human behaviour in 2009. That number must come down,” said Bell. “We want people to enjoy the great outdoors, but not at the cost of public safety.”

The new rules also require campers to build a fireguard around their fires by scraping down to the dirt and clearing away potentially flammable debris, such as twigs, leaves and needles. A shovel or at least eight litres of water must be stored nearby to extinguish the fire.

Provincial staff will begin educating campers about the new regulations during the Canada Day long weekend, giving people an opportunity to learn about the changes. As summer progresses, failure to comply with the new rules will result in a $345 fine. An additional $345 fine will be levied for campfires lit during a ban.

“Make no mistake. If we catch people being careless and causing wildfires this summer, we will aggressively pursue penalties for those responsible,” said Bell. “The message we want to deliver is that we take wildfires seriously – and so should you.”

An advertising campaign has been launched to reinforce the province’s zero tolerance for people who start wildfires. A new website, www.firesafebc.ca, is also available that encapsulates all provincial information related to wildfire activity, campfire bans, health advisories and evacuation orders.

Since April 1, fire crews have responded to 310 fires across the province, of which 260 were human-caused. Anyone who causes a wildfire through arson or recklessness can be fined up to $1 million or spend three years on prison.

We have some young and very skilled fly fishers in our community! These trout were caught in May and June. 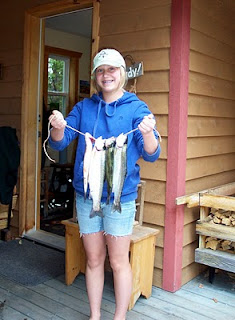 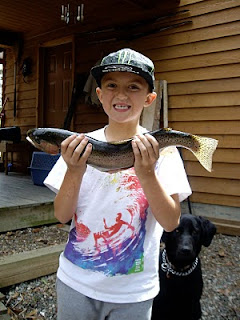 Foster Wynne (with Pepper)
Posted by Sylvia Currie at 1:26 PM No comments:

The Lac Le Jeune provincial park offers free educational programs. The Jerry's Rangers program is a great way for kids to learn about local plants, insects, and wildlife. They also have safe camping and hiking classes. The information is posted at the kiosk at the park entrance. Here are two upcoming events: 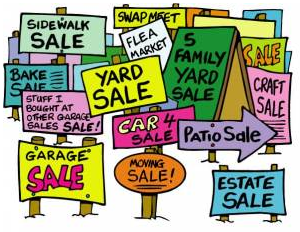 Remember to put up signs, especially at the end of your street. Balloons help, too!

Big Brothers and Sisters will pick up 'leftovers' from the Garage Sale on the June 28th. Post a comment here on the blog if you'd like for your house to be a pick-up location.

Thanks to Karen for organizing this event.
Posted by Sylvia Currie at 10:51 AM No comments:

Twice as Many Rainbows 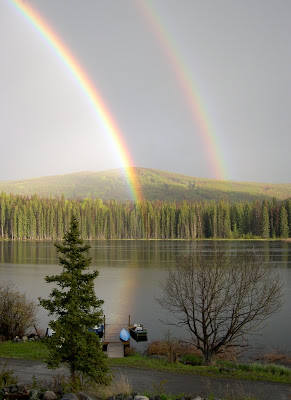 This evening we had a double rainbow at Lac Le Jeune!
Posted by Jenny at 9:28 PM No comments:

Email ThisBlogThis!Share to TwitterShare to FacebookShare to Pinterest
Labels: rainbows photo by Lucy Lindros
Sonia Walczak contributed some excellent advice to the recent email broadcast to the the Lac Le Jeune Conservation Association about bears in the community. She reminds us that "education is the key and many folks that move up here from urban centers may not know just how easy it is to live with the bears". Sonia shared a link to the BC Bear Aware website.

Are you willing to help to raise awareness in our community? Contact the Kamloops Bear Aware Community Coordinator who is willing to assist local volunteers in identifying and resolving bear-related issues. The responsibility to manage bear-human conflicts rests with everyone!

We encourage all Lac Le Jeune residents to complete this survey to help with future planning.

Posted by Sylvia Currie at 8:54 AM No comments: