Registration is open for the Dirty Feet Snowshoe Fun Run (or Walk!). The event is for snowshoers of all ages and abilities. You can choose from 5 or 10 km scenic routes around Stake Lake. 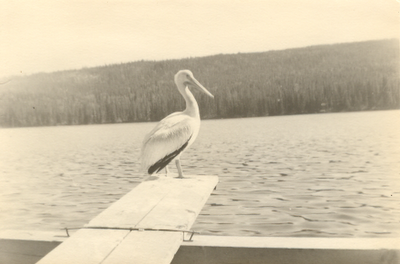 This pelican was photographed on the Burton's diving board, circa 1950. It is believed it was caught before winter and shipped to the Stanley Park Zoo. This wasn't the only pelican to make the journey to the zoo, as read in the following:


Pelican Caught At Lac Le Jeune
R.M. Robertson, sub inspector game branch, was advised Wednesday that Stuart Hull, guide at Lac Le Jeune, had caught a pelican. The bird, it is said was eating fish and Mr. Hull got within four feet of it, from where he lassooed it.

The bird was brought to the city that afternoon and sent on the evening train to Vancouver where it will be placed in Stanley Park Zoo. It is reported that the bird was much attracted by the red sweater worn by its captor and would allow no one else near it.

I received this message from Anne Atkeson, a frequent visitor to our area. If you have any leads on accommodation for Anne or others please add it here. You can also contact Anne directly by email: aeatkeson@gmail.com


Hi Sylvia, I got your email from the Lac Lejeune blog site. I have been coming up from Bellingham, WA to the lake area for several years now in winter to cross country ski. The winters are beautiful there. I especially enjoy the Gus Johnson trail. My friends and I have stayed in Kamloops, Logan Lake, Merritt and at a rental house on the lake, but are looking for a smaller, more rustic cabin for 2-4 people and a dog to rent out for 3-4 days at a time during the winter. We don't need much, just a warm stove, some water, and a few beds. We don't need TV or laundry. So I was just trying to put the word out if anyone had such a place they would like to rent out. It is so much nicer to stay by the lake or off the lake on the hill side rather than drive back and forth to Kamloops or Merritt. We are clean, gentle, respectful, hardy people who appreciate your winter world up there. So if this request can be posted or you can pass the word out to anyone you know, this would be appreciated.

Posted by Sylvia Currie at 9:00 AM No comments: 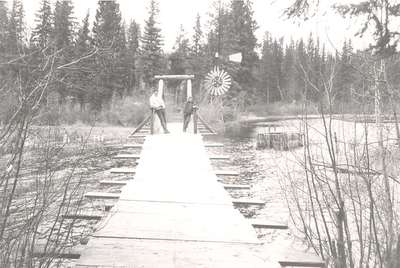 This is a photo (early 1950s) of the foot bridge crossing between Little Lac Le Jeune and Lac Le Jeune, looking from the south shore to the Lodge.

On both sides of the bridge are fish traps that were mentioned in the story below. Yes, it appears some of the traps were still in place 20 years later.

Following is a paper read by W. H. Squire, Victoria, on “Fish Lake From 1927 to 1933” read at the Fish and Game Protective Associations and Gun Clubs convention here last week:

I settled in Victoria in 1925, attracted to some extent by the publicity bureau’s statements as to the “wonderful fly fishing” on Vancouver Island. After trying out all the accessible fly water on the island, I concluded that none of it was worth wetting a line in, as the saying goes.

About June 1, 1927, Mr. G.M. Lynes of Victoria, another disillusioned fly fisherman and myself came to Kamloops for some real sport. We fished several of the best known lakes for a fortnight, but it was too early for Fish Lake, as it did not open at that time until June 10.

I returned to Fish Lake the last week in June. I made excellent catches and many of the sportsmen staying at Rainbow Lodge were, almost daily, getting the limit of 20 fine two-pounders.

I was so pleased with Fish Lake in every way that I at once decided to build a very comfortable and complete fishing lodge.

The 1927 summer and autumn fishing was, however, a great disappointment, as the lake was full of very sick spawners. Meadow Creek was dried up that year, because of the low stage of the lake, so the fish could not spawn and clean up.

In 1928 the sport was not so good and we had the spawners again as Meadow Creek was again dried up. Fish Lake was in a bad way, unless something was done. That autumn the spawning ditch from Walloper Creek to the lake was dug. I didn’t feel very sure that it would work, but it was the only hope.

In 1929 I did very little fishing, at Fish Lake, but my interest was centred on the spawning ditch. It was crude and primitive, nevertheless the fish ran up it in hundreds and spawned. I watched the spawning fish and, later on, the fry, from their first day until they were driven or carried to the lake. That autumn the ditch was widened and very much improved and a quantity of gravel was brought in.

In 1930 the fishing was hopeless, but it was apparent that there was a stock of young fish in the lake. All that summer, I again kept close watch on the ditch.

In 1931 I visited other lakes in the region, as I didn’t expect much from Fish Lake.

In June 1932, Fish Lake came back—the sport was quite as good as in 1927. It had taken that crude and primitive spawning ditch just three years to accomplish this miracle. It didn’t get much credit for it, from the authorities, however, as the dominion fisheries had taken charge, closed down the ditch, and built fish traps, one of which blocked the passage between the main and little lakes. I didn’t like the looks of this and later on it turned out that I was right. I had excellent sport for two weeks in June and then returned to the lake from July 15 to the end of August. During these last seven weeks my catch invariably contained 60 per cent or more of unclean fish. The sport had been ruined for three-quarters of the season, because the fish had been deprived of the running water, which they must have, in order to spawn and clean up.

I feel that Fish Lake is doomed unless the traps are removed, the ditch re-opened, and the fish allowed to spawn and clean up as nature intended.

Fish Lake has many natural advantages—her high altitude, pure, fresh water and clean bottom, abundant fish food, an unusual number of attractive bars and shallows for the fly fisherman, just the right size for a lake accessible by motor, an many boats can be accommodated without interference. In a word, Fish Lake could easily rank the premier fly fishing lake of the North American continent. If properly, and rationally handled. And this is not an expensive proposition—the ditch exists—of course it can and should be very much improved, as funds become available, but, in the meantime, it would suffice to make only such repairs as are necessary to put it in working condition.

I am positive that I voice the sentiment of all Fish Lake fishermen in asking that this matter be acted upon as suggested above, that the present fish traps be removed and the ditch re-opened for the 1934 spawning run.

Note: This Mr. Squire’s fishing lodge may be a cabin that still stands in the old townsite of Lac Le Jeune today.

Submitted by Neil Burton
Posted by Sylvia Currie at 8:56 AM No comments:

We are relatively new seasonal residents on the little lake (4015 Lac Le Jeune Drive). We have been quoted an insurance rate by the same company who insures our residential property in the lower mainland. It will cost approximately $2300 per year...the high rate is mainly due to our lack of fire protection, i.e. no fire hydrants or volunteer firehall within 5km. And other companies we have tried to get quotes from will not insure us at all for only the seasonal property.

My question for the blog is to ask for advice from other seasonal residents as to what they do for insurance...and if this means having to switch our residential insurance over to another company so we can have a rider added for our lake property that's OK.

Thank you,
Sue and Brent Pierce
Posted by Sylvia Currie at 8:51 PM No comments:

Beavers are active all winter, but we don't see them out in the snow very often. Maybe that's because they mostly come out at night. Hana Struss photographed this busy beaver in her front yard between 2:00 and 4:00 a.m. 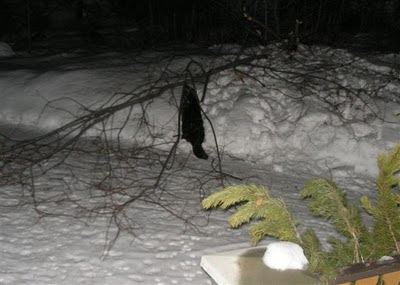 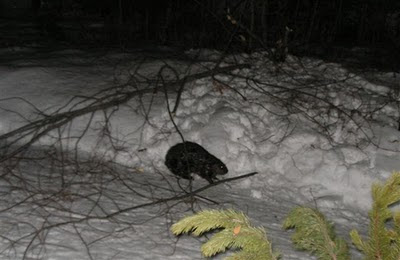 photos by Hana Struss
Posted by Sylvia Currie at 1:29 PM No comments:

Due to seasons of unusual drought it was found impossible to maintain a flow of water in Meadow Creek, the outlet from Lac Le Jeune (Trout or Fish Lake). No other stream being available, the fish were unable to reproduce their kind. It was therefore decided to construct a ditch from a point below outlet of Walloper Lake into the main lake and to use this as a spawning ground in future.

Immediately the necessary water license could be secured, construction was commenced and the job completed in a foot of snow last fall.

The amount of available water being limited necessitated the ditch being kept fairly small and on as flat a grade as possible (one-tenth of one per cent was used). Running water has to be kept over the fertilized eggs until they hatch and the fry are grown big enough to be returned to the lake.

The ditch was 6000 feet in length mostly on a step side hill.

Some trouble was experienced with bad ground and it was necessary to flume about 375 feet of this at the outset.

It is too early to see the results of this work, but it is expected that lots of young fish of this year’s hatching will be seen in the lake next season.

It is reported that since the adult fish of the lake have been able to resume their natural habits, all those being caught now are of good color and in good condition.

Submitted by Neil Burton
Posted by Sylvia Currie at 9:48 PM No comments:

How fast can you skate? 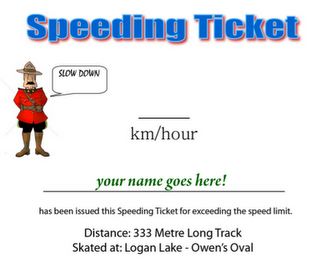 How fast can you skate? Come out to Owen's Ovalat Logan Lake on January 8th to find out! Starting at 1:00pm RCMP officers will be using their radar guns to track your speed and hand out speeding tickets. Lace up your hockey, figure or speed skates and come out to Logan Lake this weekend!

This is notice to all Lac Le Jeune & Walloper Lake residents that I now have a new email address.
To contact me please use the following address: lindamarclegare@gmail.com
Thanks!
Linda Légaré
Posted by Linda Legare at 2:43 PM No comments:

Are you wondering what to do with your Christmas Tree? Bring it to the Lac Le Jeune Transfer Station during regular hours until January 31, 2011. Recycled trees produce compost material for use in parks and gardens.
Posted by Sylvia Currie at 9:03 PM No comments: