Effective at noon on Thursday, August 1 all campfires will be prohibited across the Kamloops Fire Centre.

Posted by Sylvia Currie at 7:45 PM No comments:

Get out of your kitchen during August long weekend!

The licensed restaurant & patio at the Wilderness Resort will be open Saturday and Sunday 9am - 9pm. Stop in for breakfast, or later in the day for a homemade burger with all the fixins. 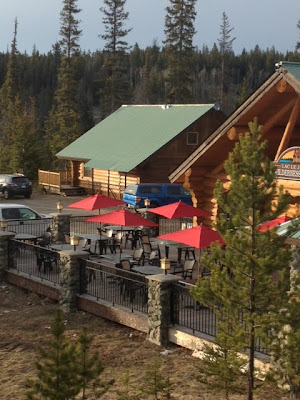 Posted by Sylvia Currie at 11:00 AM No comments:

Posted by Sylvia Currie at 2:48 PM No comments:

It's that time of year when we see more bear activity in the Lac Le Jeune area. I saw a large boar on the Gus Johnson a couple days ago, and there have been reports of a large bear named Albert in the area :-) So this is a good time to remind everyone to be extra careful with waste management. Bears are attracted to the smell from garbage and compost bins. If they aren't successful in getting a meal then they are less likely to return. But remember, meal or not, the smell attracts them in the first place.

For more information about bears visit http://www.wildsafebc.com/. Wildsafe is a program that is designed to reduce human wildlife conflicts through education, innovation and cooperation.

Posted by Sylvia Currie at 11:17 AM No comments:

We recently had a break and enter theft at the work shed of the Lac Le Jeune Provincial Park. This incident occurred between July 21, 2013 at 2200 and July 22, 2013 at 0800 when it was discovered. An unknown person(s) broke into the shed steeling money from two clipboards that are used by Parks Personnel to collect the fees from campers. Also stolen was an Echo gas weed eater, timberline weed eater line and an orange "forestry type" hard hat with face guard and ear protection attached.

RCMP are looking for any witnesses who may have seen a vehicle or person in the area after the gates to the park were locked for the night. If you have any information that can lead to the identification of the person(s) responsible for this or any other crime please call CRIMESTOPPERS at 1(800)222-TIPS (8477) or the local RCMP Detachment at 250-523-6222.

You will notice some fuel management activity on the Gus Johnson and other areas around Lac Le Jeune. This involves pruning trees and removing deadfall. Debris piles will be burned in the fall. This program reduces the likelihood of aggressive, fast-moving wildfires. So expect chainsaw noise and motorized vehicles.

Thankfully we also have helpful visitors who load up their trucks with fallen tress found along the logging roads. While cycling his morning I ran into this fellow from Chilliwack who was out with his 3 kids (cooling off inside the truck) cutting and gathering wood. Quite a haul! 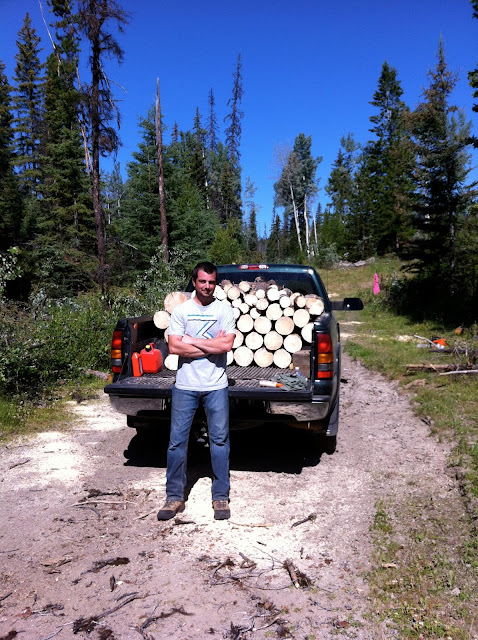 Posted by Sylvia Currie at 4:19 PM No comments:

Hold the date! The Lac Le Jeune Conservation Association Annual General Meeting will be held on September 1, 2013 at 1:00 p.m. Venue and agenda to follow.

Posted by Sylvia Currie at 2:45 PM No comments:

Posted by Sylvia Currie at 4:05 PM No comments:

Email ThisBlogThis!Share to TwitterShare to FacebookShare to Pinterest
Labels: wildfires

This information is from the BC Wildfire Management Branch.

Open Fire Bans in Kamloops Fire Centre
• Definition of Open Fire categories
Effective at noon on Saturday, June 15, the current open burning ban will be expanded throughout the entire Kamloops Fire Centre to include the Salmon Arm and Clearwater fire zones, in order to help prevent human-caused wildfires and protect the public.
This prohibition will remain in place until Oct. 1, 2013 in the Clearwater and Salmon Arm fire zones and until Oct. 15, 2013 in the Kamloops, Vernon, Penticton, Merritt and Lillooet fire zones, or until the public is informed otherwise.
Specifically, this open fire prohibition applies to:
This prohibition covers all B.C. parks, Crown lands and private lands, but it does not apply within the boundaries of a local government that has forest fire prevention bylaws in place and is serviced by a fire department.
Campfire Bans in Kamloops Fire Centre
• Definition of Campfires
There are currently no campfire bans in effect for the Kamloops fire centre.
This prohibition does not ban campfires that are a half-metre high by a half-metre wide (or smaller) and does not apply to cooking stoves that use gas, propane or briquettes.
Forest Use Restrictions in Kamloops Fire Centre
There are currently no forest use restrictions in effect for the Kamloops fire centre.
Posted by Sylvia Currie at 5:35 PM No comments: