Here is a story that many oldtime families of Fish Lake have heard repeated. It happened in July 1924.


Motion Picture Machine Lost
C.P.R. Publicity Photographer Drops $4,000 Camera Into Water of Fish Lake
Mr. J.M. Alexander, official photographer of the C.P.R. publicity department, met with an expensive accident while taking moving and still life pictures of Fish Lake last Monday. Alone in a boat on the lake, Mr. Alexander had lashed his camera, valued at $4,000, in the bow. A squall sprang up and the rolling of his craft broke loose the lashings and let the valuable machine down into twenty feet of water and an unknown depth of Fish Lake mud. The spot was marked and divers from Kamloops sent for but they had no success in locating the lost machine. An expert diver from the coast was then sent for but he met no better luck, finding that when bottom was reached so much mud was stirred up that sight was impossible. Effort after effort proved wasted and now Mr. Alexander is offering $300 to the person who can bring his lost moving picture camera from the depths of the lake.


(Reprint from the Kamloops Sentinel - Friday - July 25, 1924 - page 1)
(Newspapers read at Thompson Rivers University or Kamloops Museum & Archives)
Submitted by Neil Burton
Posted by Sylvia Currie at 10:33 AM No comments:

Thanks to LLJ resident and TRU Animal Health Technology instructor Sonia Walczak for drawing our attention to these pets that are ready to be adopted.

Loki is a handsome 4 yr old Shepherd cross. He is an energetic dog that enjoys playtime with other dogs and going for long walks. Loki has a curious nature and likes to investigate new things. He gets along well with most dogs (females are best) but is not good with cats. He would do best in a home where he gets lots of daily exercise as well as a consistent routine to help keep him focused.

JoJo is a pretty little female that is 2 yrs old. She is an independent kitty that is affectionate on her own terms. JoJo enjoys sitting in the window watching the great outdoors or basking in the sunlight. She is okay with other cats as long as they don't get in her space. JoJo would do best in a quiet, indoor home environment.
Posted by Sylvia Currie at 10:19 AM No comments:

Email ThisBlogThis!Share to TwitterShare to FacebookShare to Pinterest
Labels: pets 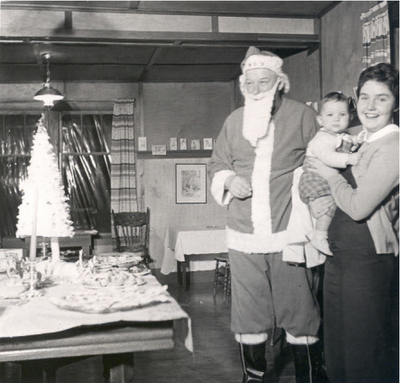 A request was made to the then School District 24, by Mrs. J. Whitaker, in October 1954, for a school at Lac Le Jeune as it was expected that by the next September there would be sufficient pupils. The area now had 6 children, the School District required 8.

The log school sat on the Lodge's property (north-east) corner near the creek. The school building was rented to the SD 24 by the Whitakers.

Fire destroyed the school facility in November 1959 and the 10 pupils took classes in the lodge's dining room.

SD 24 had to move quickly, as the ski season was coming. Back in those days, it appears SD 24 had to seek approval of expenditures, from the City of Kamloops, the Village of North Kamloops and area ratepayers. What SD 24 needed was $4500 for a trailer. Kamloops City Council were in agreement.

In February 1960, finishing touches were being made at SD 24's maintenance shop of a fully equipped trailer-classroom to move to Lac Le Jeune. This would be the second trailer-classroom of SD 24, as one was supplied to the Deadmans Creek area in the Fall 1959.

What would school be without a Christmas concert and Santa and the hospitality of John and Muriel Whitaker the owners of Lac Le Jeune Lodge (Home of fighting Rainbow Trout and downhill skiing)?

In this photo, of the late Reginald Burton, is shown Miss Beulah Philip, a high school student and lodge employee holding a young one to meet SANTA (Alex Seibel), a townsite propertry owner and Kamloops businessman.

(Source: Kamloops Daily Sentinel - read at facilities of Kamloops Museum & Archives and the Thompson Rivers University)
Posted by Sylvia Currie at 8:53 AM No comments:

Here is a bit of Lac Le Jeune history before forest fires and pine beetle kill.

A native of the Punjab province of India is said to have walked all the way from California, in 1921, to become a resident of Canada, first at Kelowna.

He moved to the Kamloops area, in 1921, engaging in farming.

The gentleman was SHER SINGH, who purchased land, in the early 1940s, in the Brocklehurst area of the City of Kamloops. Singh Street is named after him.

The Stake Lake Ski Trails officially open tomorrow! Most of the ski passes are available at the booth and the debit/Mastercard is in the midst of being set up. Bring cash until the system is up and running. Thanks to Dwayne Geiger for the notice.

Become an Overlander Ski Club member to get regular updates by email.
Posted by Sylvia Currie at 5:06 PM No comments: