It seems we have 2 very cute but unwelcome marmots making a home under our cabin. Has anyone dealt successfully with a problem like this in the past or have a good solution for us?

Wharf at the park

We're seeing a lot of damage caused by the high winds yesterday! These photos of the twisted wharf at the park are from Mike Brugger. 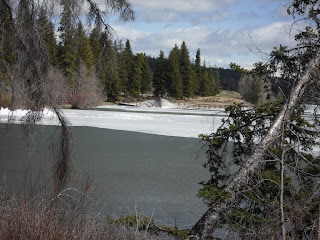 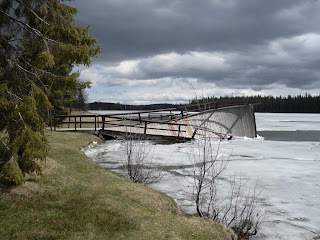 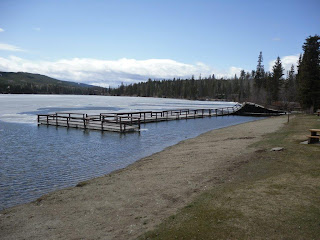 Posted by Sylvia Currie at 10:03 AM No comments:

Ajax Mine: Questions to provincial candidates for May 14th, 2013 election

The following questions have been gathered from a variety of local groups who are concerned about the many risks to the City of Kamloops and the surrounding environment from the operation of a large low-grade open-pit mine within its boundaries. The effort by the Community Advisory Group is still in progress. Together we are asking that all candidates in the upcoming provincial election state their position on the issues raised and endorsed by the local groups

In addition, the LLJCA executive would like the following question posed:

“As there are certain remediation efforts which must be carried out by the Ajax Mine at the end of the mine life, why is the mining consortium not required to hold a bond for the anticipated costs of the entire cleanup and remediation, over the life of the project?”

1) During his recent visit to Kamloops, the federal Minister of Environment Peter Kent stated that the Federal Panel Review is the “Gold Standard” of environmental assesments, however, refused to grant our community such a review.

QUESTION: Should your party form the next provincial government, would you insist that the residents of Kamloops be granted the highest level of environmental assessment available for the proposed Ajax Mine?

2) The Proponent (Ajax Mine) has refused to conduct a proper full size operational test blast to allow our community to better assess the impact of 8400 consecutive days of blasting to our homes, our well being, the Kinder Morgan Pipeline and the local environment.

QUESTION: Should your party form the next provincial government, would you insist for a series of full size operational test blasts by the Proponent with independent monitoring and full access to the public (which proper safety measures in place) to properly assess all of the many potential negative impacts?

3) Over half the footprint of the proposed Ajax Mine falls within the boundaries of the City of Kamloops. Furthermore, a joint initiative by KGHM, NewGold and Galaxy is currently undertaking an exploration program well within the City boundaries in the subdivision of Aberdeen. The City of Kamloops and its residents have no input or say in the level of encroachment by the mining industry and Ajax Mine into our community.

QUESTION: Should your party form the next provincial government, would you support a full review of the Mineral Tenure Act with the purpose of protecting established communities from the direct encroachment of the mining industry?

4) The feasibility Study of the proposed Ajax Mine states that the cost of hydro will be $0.035 per kWh. This is substantially lower than the cost to produce a new kWh of power estimated at $0.12 according to recent correspondence with BC Hydro.

QUESTION: Should your party form the next government, would you support a review of power subsidies to foreign owned corporations while the residential ratepayers of BC continue to be faced with skyrocketing electrical power rate increases?

5) The proponent Ajax Mine has stated that it will not provide any level of compensation to the community for potential damage from mining operations or loss of property values due to its proximity to existing homes.

QUESTION: Should your party form the next government, will you insist that the Proponent properly compensate landowners for any direct damage caused by its operation within our community as well as any loss of property values due to its proximity to existing homes?

6) The physicians and surgeons of Kamloops have expressed overwhelming support for a federal review panel in a letter recently sent to the Hon. Peter Kent, Minister of Environment, and signed by 60 doctors. In that letter they expressed their concern over the possible health impacts of = the proposed KGHM Ajax mine.

QUESTION: If elected, will you support and endorse a federal review panel, including an independent neutral health impact assessment and risk assessment?

7) Kamloops Domtar's closure of its mill has negatively affected Kamloops economy. If approved and built, KGHM Ajax closure in 23 years will cause a similar downturn.

QUESTION: If elected, will you insist that the Proponent create a plan for economic phase-out so as not to create a sudden hole in employment in  the community?

8) The building and operation of a large open-pit mine on city boundaries may prevent owners of clean, tertiary, knowledge and tourism-based businesses from locating in Kamloops, thus retarding Kamloops transition to a broad-based economy and pushing Kamloops back into resource-based boom and bust cycles.

QUESTION: If elected, will you insist that the Proponent's socio-economic study identify ways to mitigate the potential loss of clean new businesses?

9) KGHM Ajax mine plans include a possible smelter.

QUESTION: If elected, will you insist that a smelter not be included without full public inquiry, knowledge and consent?

10) Making an informed decision regarding the KGHM Ajax proposal requires the most reliable, statistically significant, assay information for all toxic elements. The Proponent does not intend to include chromium, manganese and uranium, highly toxic elements commonly found in such sites, in its target list for rock composition.

QUESTION: If elected, will you insist that the Proponent undertake and examine a full assay, including chromium, manganese and uranium?

11) The Kamloops area is known for underground streams which can carry acid mine drainage and/or heavy metals long distances over time. If such toxins are found in our drinking water supply, either during the operation of the proposed mine or after closure, finding and developing a sufficient new source would bankrupt our city.

QUESTION: If elected, will you insist that the Proponent commission an independent and complete hydrogeological study to determine potential contamination of the S. Thompson River upstream from Kamloops' drinking water intake?

As part of this process, a delegate from LLJCA will meet with the candidates on May 14th, and results will be published on the Lac Le Jeune blog. In addition, Kamloops Area Preservation Association will sponsor an  information sheet with the responses to those questions.

Thank you to Mike Brugger, John Watson, David Wyse, and others who have been involved in these discussions.
Posted by Sylvia Currie at 6:45 AM 1 comment: Wilderness Resort is looking for a couple on-call, part-time cleaners to help out with light cleaning of the cabins. This would be an ideal job for someone living in the Lac Le Jeune area.

Posted by Sylvia Currie at 5:21 PM No comments:

The BC Citizens Patrol Network is a group of volunteers who help local police identify suspicious activities in the community. Their assistance can help police prevent and respond quickly to crime. This program is supported by the Crime Prevention Association, an integrated team of citizens and police, dedicated to preventing crime.

Logan Lake has benefited from a successful BC Citizens Patrol program, and Cpl. Kathleen (Kat) Thain, Logan Lake RCMP, forwarded information about the program for Lac Le Jeune residents to read and consider for our community. Kat mentioned that the Logan Lake group would be happy to work cooperatively with a group from Lac Le Jeune, and training is available.


The BC Citizens Patrol Network Society (BCCPN) functioning under the umbrella of the BC Crime Prevention Association (BCCPA) is looking to offer training and resources in support for all British Columbia communities, urban and rural.

If your program or region would like to conduct a project or training session let us know the details, we will work with you to see how we can support your initiative.

We aim to facilitate the processes that enable volunteers and police officers across the province to continue to work together in the interests of community safety and well-being.

The benefits are obvious: improved communication and networking among volunteers and coordinators, opportunity for Provincial recognition of local efforts, promotion of best practice for local or regional consideration, volunteer training opportunities and increased consistency across the Province.

The BC Citizen Patrol Network is not intended to detract from the autonomy of local groups. It will not interfere in the established right and ability of the local detachment commander / police chief to manage and direct Citizen Patrol operations.

BC Citizens Patrol Network Society is a community-driven crime prevention initiative, governed by the BC Crime Prevention Association. The network supports provincial trained volunteers with a mandate to detect disruptive, suspicious, and criminal behaviour.

Are you interested in becoming involved in a Citizens Patrol group at Lac Le Jeune? Do you have questions?