The pine grosbeaks are usually here by mid to late November. Has anyone seen them?

Those of us who frequent the Gus Johnson trail and surrounding area have been watching out for the moose and calf that have been spotted in various locations -- near the trail, in yards, walking down Lookout Road, and there was even evidence that they walked across the Wyse's deck to look in the sliding glass door! It's been both thrilling and frightening to see them!

Unfortunately, the calf was recently found dead close to the clearing/ burn area between the Gus Johnson trail and Osprey Road. It's not apparent how it died, but we suspect it could have been a cougar. Over the next few days we will have a better idea. If a cougar was involved then she/he will almost certainly return on several occasions to eat the carcass. This is from the Ministry of Environment website, a useful article to read if you want a quick overview of cougar habits.


Cougar generally eat about 70 per cent (by weight) of the carcass of a big-game animal, leaving most of the larger skeletal bones, the rumen, some viscera, and parts of the hide. They will make repeated visits to a carcass, take a meal during each visit, and usually cover the remains with dirt and debris after each feed.

Meanwhile, be careful when out walking, especially in the area where the dead calf was found.
Posted by Sylvia Currie at 2:41 PM 6 comments:

An update on the Water Monitoring Project from David Wyse...

At the end of February in 2012, we received an e-mail from Marg Sidney, who works with the Water Quality Section at the Ministry of the Environment (MOE). Marg told us that personnel at the MOE had been talking about issues at Lac Le Jeune and discussing options to collect more information on the lake. She indicated that they have very limited data on the lake, no current data, and knew that with the number of major changes around the lake in the last 20+ years (residential development and pine beetle) it was critical to gather data on the lake. Marg said that she worked with a number of lake groups and individuals in the Thompson/Nicola area that, like us, were asking questions and seeing problems arising on their lakes and in their watersheds. She reported that many lake side residents are wanting to know more about what is going on in “their” lake, are asking a lot of important questions and are wanting to become more involved with decisions that affect them. In the e-mail, she described a program developed by the B. C. Lake Stewardship Society (BCLSS) whereby lakeshore residents go out on “their” lake to collect data on a regular basis (at least 12 times throughout the open water season) and after three years of data collection, a state of the lake report is written by the staff at BCLSS. There are five levels of data collection going right from the simple testing using only a secchi disk all the way up to a full blown watershed assessment. The higher you go through the levels, the more involvement from MOE staff and the more money it costs the MOE.

After providing us with this information, Marg asked if we would be willing to meet with her to discuss the beginning of a monitoring program. Residents were contacted from all areas of the lake and a meeting was held with Marg in early April, 2012. She was so impressed with the commitment from the group that met with her that she asked if we would be willing to jump right in to the third level of monitoring (provided that she could secure funding that would pay for the analysis of the water samples and that we could find funding to purchase a monitor that collects data from different depths of the lake.)  We were both successful in receiving funding and we began our first monitoring of the Lac Le Jeune water quality in May, 2012 when the ice first came off the lake. The water monitoring program is crucial to the mission of the Lac Le Jeune Conservation Association which is one of stewardship.

Our monitoring involves three stages. Each time we go out to sample, we begin the process by taking a secchi disk reading. A secchi disk is a flat metal plate that has black markings painted on a white background. The disk is lowered in to the water until it cannot be seen any more. The depth to which the disk may be seen depends on the amount of suspended material (such as sediment and/or plankton and phytoplankton (microscopic animals and algae). In an oliogotrophic lake it would be possible for the disk to be visible to depths greater than 6 meters. In mesotrophic lakes the disk should be visible between 3 meters and 6 meters. In eutrophic lakes, the visibility would be less than 3 meters.

The average secchi depth for 2012 on the big lake was 6.15 meters. This would correspond to a lake on the border of oliogotrophic and mesotrophic status.

The second stage of monitoring involves lowering a special probe into the lake and taking readings at each meter of depth. (The probe was purchased through a grant from the TNRD.)  Along with other data, the readings on the probe provide information on the amount of oxygen in the lake at different depths as well as temperature changes as the probe is lowered meter by meter.

In the third stage of monitoring, we lower a special collecting bottle and capture water at a variety of depths. Some of the captured water is poured into small bottles which are subsequently frozen. The remaining captured water is filtered to ascertain the amount of chlorophyll in the lake. All of the analysis is conducted at a laboratory in Vancouver with the data forwarded to the Ministry of the Environment in Kamloops.

The data that we have collected on the amount of nutrients in the lake (nitrates and phosphorous) indicate a lake in the eutrophic state. Since the last testing was completed in 1977 it appears as though there has been a very high increase in the amount of nutrients coming in to the lake. (There was one test conducted in 1993 which also indicated an alarming increase in lake nutrients.) If the data is accurate, there is cause for concern.

We will continue to do the sampling for the third year in the big lake and enter the second year of sampling in the little lake. The results of this study are critical to the proper maintenance of our lake (which acts as our reservoir) and the surrounding water shed.

More volunteer help is always welcomed. If interested in helping out next year (beginning at ice off and continuing until late October) give David Wyse a call at 250-374-8542 or e-mail dkm_wyse@telus.net.
Posted by Sylvia Currie at 7:23 PM No comments:

This update is from David Wyse. (Thanks for doing this, David!)

I contacted the rural post office box department in Canada Post several weeks ago when our mail box was stolen. The person responsible for placement was away on holidays, but contacted me today. She said that currently, they don't have the budget to move the boxes but will install what she called "stabilization kits" that connect the boxes together making them much more difficult to steal and/or knock over.

Update 13 November: A mailbox has been stolen! Again!
Update 14 November: There were 9 mailboxes, then 8, then 9... It wasn't stolen! Canada Post took it to do minor repairs then replaced it the following day.
Posted by Lac Le Jeune Community at 9:15 AM 2 comments: 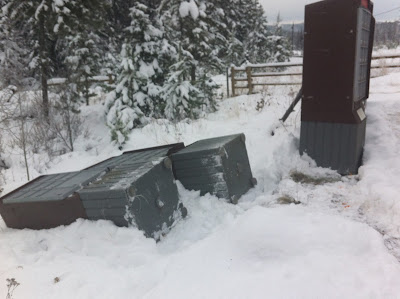 Our mailboxes suffered another incident. It looks like this time someone took the corner a little too fast!


Time to get ready for ski season! An Overlander Ski Club season trail pass allows access to all club-maintained ski trails, as well as snowshoe trails and the newly constructed dog-friendly trails. The pass includes ski club membership. There is even night skiing!

You save by purchasing the pass online, and before 15 November. Not skiing this season? Consider becoming a club member as a way to support this great local resource.

Anybody recognize this skier? The photo was taken 5 years ago.


Posted by Sylvia Currie at 7:13 AM No comments: