UPDATE: Excellent news! This turned out to be nothing to worry about. It was a neighbour returning from a late night shift and was placing a borrowed item on the deck.

This report is from Kecia Turunen:

Last night at about 1:30 am we were woken up by our dogs frantically barking out the front window. A second later our porch motion detector light turned on. Thinking it was a bear or other animal we went to investigate only to discover someone get into a waiting vehicle at the end of our driveway. RCMP were notified. The car sounded like a manual 4 cylinder with a rattling exhaust.

Keep vigilant everyone.
Posted by Lac Le Jeune Community at 1:26 PM No comments:

UPDATE: The kitty is now back at home on Osprey

A sweet little grey tabby cat has been hanging around Marmot Street. She seems frightened, and like she would prefer to be inside.

2. Bring a mug if you think of it. We'll have disposable cups, too.

3. Read the minutes from the 2013 AGM, and print out if you want your own copy. The balance statement is a separate document. Printed copies of the 2014 AGM Agenda will be available at the meeting.

4. Bring $10 for membership fees (for new application, or renewals if applicable)

Posted by Sylvia Currie at 7:23 AM No comments:

Cougar in the neighbourhood

This afternoon around 4:30 p.m. Dave Falcon was on the trails with his mountain bike and dog, Ukie, at the end of Lac Le Jeune Road near the pond. Dave stopped to clear some branches when Ukie began to bark. At first he assumed there was a calf on the trail, since cattle are often found grazing in that area. However, the dog's bark became frantic, then Dave saw something moving in his direction approximately 20 metres away. It was a large cougar, with ears pinned back.

Dave attempted to call Ukie but there was a flurry of activity and loud noises, then silence. Assuming that Ukie did not win the struggle, and for his own safety, Dave left the area. Back home he was telling the story to his neighbour when who runs down the street? Ukie!

Ukie is at home resting, with no apparent injuries. It's a complete mystery how he survived the encounter.


We're so happy about the END of this story! Meanwhile, keep your pets and kids safe. Dave has contacted the Conservation Officer Service.

Here is an excerpt from the Safety Guide to Cougars from the BC Ministry of Environment website:


If you meet a cougar:
If a cougar behaves aggressively:

Cougars are a vital part of our diverse wildlife. Seeing a cougar should be an exciting and rewarding experience, with both you and the cougar coming away unharmed. However, if you do experience a confrontation with a cougar or feel threatened by one, immediately inform the nearest office of the Conservation Officer service.
Posted by Sylvia Currie at 7:16 PM No comments:

Do you know someone with expertise in capturing injured birds? There is an injured hawk at the Meadow Creek Golf Club in Logan Lake. The Wildlife Park in Kamloops will take the bird if someone is able to capture it.

Via Carolyn Chandler
Posted by Sylvia Currie at 8:51 PM 2 comments:

Conservation Officers are advising Logan Lake residents and visitors to keep an eye out for a cougar. The cougar has been spotted near the golf course and campground, and is coming unusually close to people.

"Cougar closeup" by Art G. - originally posted to Flickr as Those Eyes. Licensed under CC BY 2.0 via Wikimedia Commons.

Thanks to Carolyn Chandler for the heads up!
Posted by Sylvia Currie at 8:38 PM No comments:

The Lac Le Jeune Conservation Association Annual General Meeting will be held on Sunday, September 14 at 11:00 AM. The location is 5865 Lac Le Jeune Road (at the top of the hill,the first driveway to the right just past Heron Road). This is the same location as last year's meeting. Hope to see all of you there! 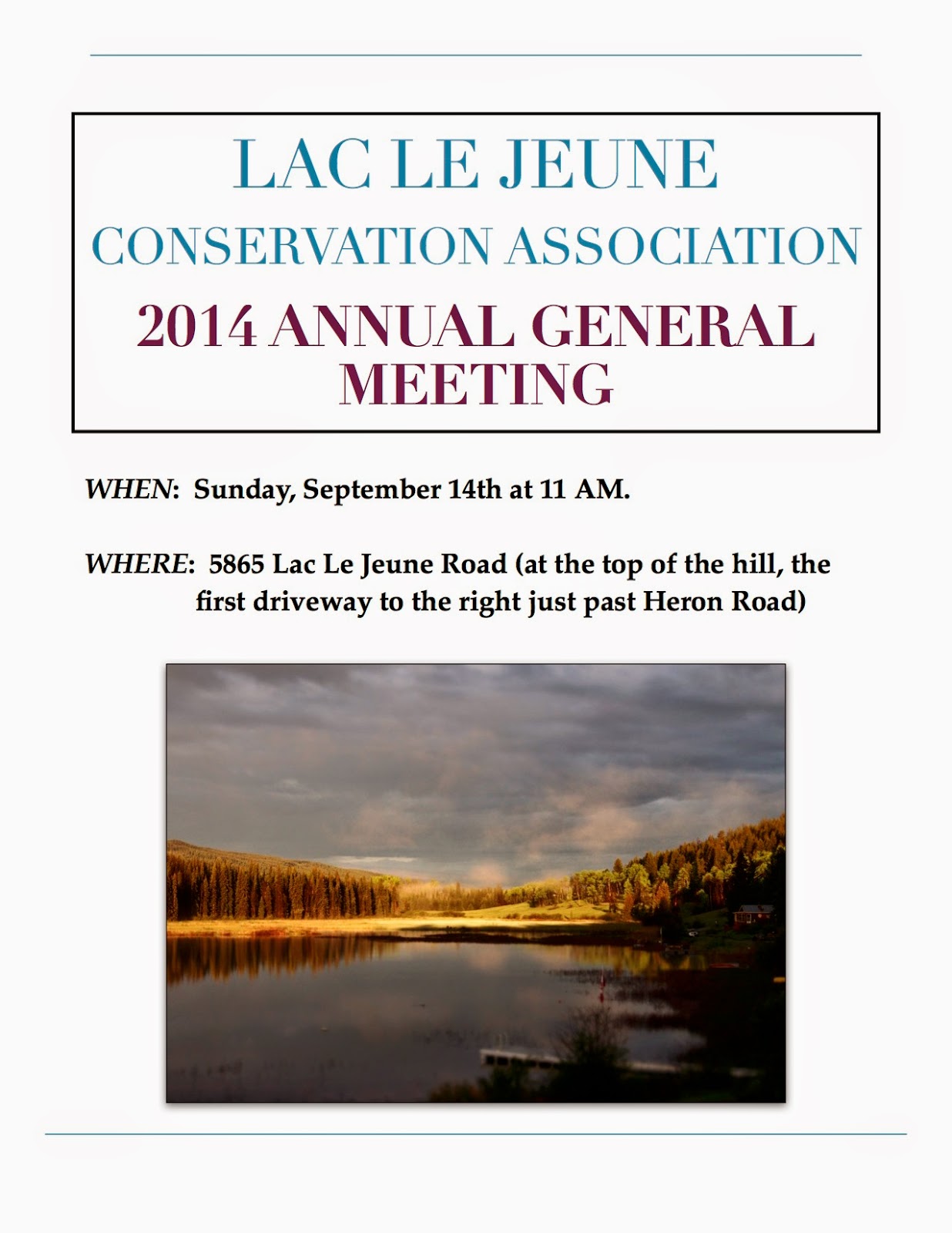