The April 2015 BCLSS Newsletter is available for download (PDF).

Posted by Lac Le Jeune Community at 8:56 AM No comments:

Another weekend, another fire

Another weekend and another fire...same location as last weekend.

This time the wood was cut with a chainsaw. It seems unlikely that someone would take a chainsaw in a boat, so perhaps it was carried down from the subdivision. This occurred Sunday evening. Did anybody witness this? 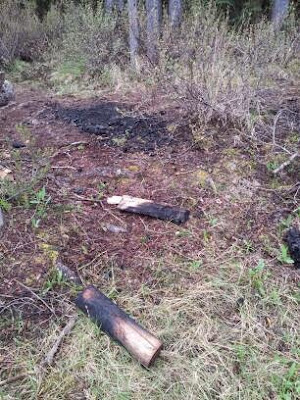 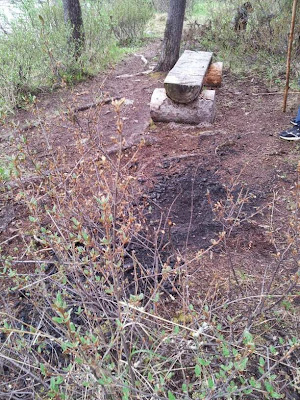 Thanks to Coleen Krawchuk for the photos.
Posted by Lac Le Jeune Community at 5:40 PM No comments:

HVC is conducting a survey to gather feedback from residents on how they feel HVC is managing its mining activities, including the benefits and impacts of its operation. HVC will use this feedback as one of the several ways to assess its performance and identify opportunities for improvement.

We invite you to share your thoughts with us by taking this survey. In appreciation of your participation, you can choose to be entered into a prize draw. A total of 8 prizes will be awarded. Winners can choose from one of the following prizes:
1) an IPad Mini;
2) a $300 gift card; or
3) another gift of equivalent value.

You will need internet connection to fill out the survey. The link will be open online until the end of June 2015.

You can access the survey at the following ink:
http://www.surveygizmo.com/s3/2078533/HVC-Perception-Survey

Thank you for your participation. Please also let others know about the survey.

Please address any questions or comments to:

Posted by Lac Le Jeune Community at 4:56 PM No comments:

Email ThisBlogThis!Share to TwitterShare to FacebookShare to Pinterest
Labels: surveys

In March students and instructors from the British Columbia Institute of Technology came to Lac Le Jeune on a limnology field trip to study the lake under winter conditions. Marge Sidney from the Ministry of Forests, Lands and Natural Resources Operations continues to work with the BCIT group and passed along this full report for distribution. Posted by Lac Le Jeune Community at 5:23 PM No comments:

Campfires on the Gus

REMINDER! Campfires are not permitted on the Gus Johnson trail on park land. Please keep your eyes open for fires and do you part in educating visitors and new residents.

This location along the shore not only had a campfire, but also required some clean up. 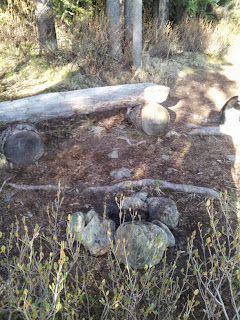 Thanks to Coleen Krawchuk for the photo and for passing along this important reminder!
Posted by Lac Le Jeune Community at 7:29 AM No comments:

A plan of the Trout Lake Summer Resort, on the north side of Lac Le Jeune, was surveyed by Charles Henry Taggart, D.L.S., prior to December 1911.

In Spring 1912, Donald Roy Cameron, B.A., B.S.F., Forest Supervisor, arrived in Kamloops to open an office for the Dominion Forestry Branch in B.C. to oversee work of the Forestry in the "Railway Belt" between Field and Vancouver.  In the Lac Le Jeune area, the southern boundary of the Belt, was south of Ridge Lake. (The name Ridge Lake appeared on a map of the Department of the Interior dated 20 April 1909.)  Cameron's office was located in the Post Office building, but by early 1915, was in the Acadia Building (4th Ave. & Seymour St.)

The Department of the Interior, Ottawa, 16 July 1912, issued an offering of  leases for villa lots at Trout Lake in the Long Lake Forest Reserve, which was published locally before the end of July.  Applications would be received on or after 10 August 1912.

Leases were for terms of 42 years and could be extended for that same length.  Rents varied from $8 to $12 per year.  (Rentals ended up being re-adjustable in 1920 and every 10 years thereafter.)
Before construction commenced, a building plan had to be approved. The applicant, on the lot applied for, had to erect a building valued at no less than $300 within 1 year.

It might be asked, how many of those named may have been speculators?  To what affect might the world money markets have had on these original applications? Too, there was a crisis brewing in Europe - the beginning of World War I.

F.E. Young, the proprietor of the Kamloops Standard newspaper, whose name was listed above, died in Kamloops, in May 1914.

(Fish Lake was the training camp as well, in July 1914, for a lightweight boxer Champion O'Leary - high altitude training.)

S.C. Burton had originally applied for a lease, in July 1914, but his chosen lot was already applied for.  He re-applied in 1915, and was successful.

The Dominion Forestry Department constructed a road along the lakeshore (Water Street) for the benefit of the lessees in Summer 1915.

According to the Kamloops Sentinel, 01 August 1930, the Province of B.C. took over  Dominion lands and offices of the "Railway Belt" and the Peace River Block that day.

It appears that Water Rights may have been transferred from the Dominion Government to the Provincial Government, as in 1913, the Kamloops Standard had many notices advertised for water rights.

Robert Cowan of Fish Lake posted two water notices dated 06 June 1913, one being, out of Guerrin Creek, in a southerly direction into Meadow Creek, and the second, for penning 300 acre feet, from Walloper Lake, flowing southerly to Meadow Creek.

Looking back to previous blog postings of Lac Le Jeune Reminiscences (03August & 20 September 2009) and Images of the Past (30 September 2009) all submitted by Hugh Burton, here is some information to add about the Dominion Forestry and Fish Lake Reserve.

Prior to September 1914, a George Duncan had been a Forest Ranger at Fish Lake. At this time he was now with the Provincial Police stationed in the Peace River district.

In January 1915, the Dominion Forest Branch had 3 horses stray from Fish Lake and offered a reward of $10 per head for being found.

In July 1915, C.R. MacKenzie, of the Forest Rangers department would be away from Fish Lake, about 10 days, to assist in the setting up of Greer Mountain (Greenstone) ranger camp.
Talk was also to the effect of a telephone line between Kamloops and Fish Lake. The new Government road from Fish Lake to Long Lake was completed in July 1915. (This may have been the Goose Lake road.)

By mid-October 1915, the Hon. R. Rodgers, minister of public works, Ottawa, had given the green light for the extension of a telephone line from Knutsford to Goose Lake. Construction on the Knutsford-Goose Lake and Forestry line commenced October 26th.  On November 26th, the Government telephone crew was using the old school house at Fred Humphrey's place and the building, their belongings and equipment were destroyed by fire. Work on the telephone line was still proceeding from Fish Lake.  A Mr. P. Nelms was a foreman of one of the Forestry line gangs.

The Government Telephone line from Kamloops and the Forestry line extended from Fish Lake was completed before Christmas 1915. There was a switch installed with a public pay station at the C.R. Mackenzie ranch.

According to D. Roy Cameron, District Inspector, a joint request for funding by the Government Telephone Service and the Forestry Branch was turned down by the Dominion Government.  He stated that it was the initiative of Kamloops' ex-mayor J.T. Robinson who convinced the Government of a grant for this telephone service.

In December 1915, Fish Lake forest ranger  J.W. Smith enlisted to serve overseas in WWI.
D. Roy Cameron was a forward thinker in the protection of the forests of the British Columbia interior and got his aerial view of the forests flying with Major Clarence MacLaurin, superintendent of the Canadian Air Board Jericho Beach station.  Major MacLaurin brought a knocked-down HS2L flying boat, by train to Sicamous, where it was re-assembled and the pair flew to Kamloops, stopping at Chase, in search of seaplane harbours. Arrival in Kamloops was 04 November 1920 in the HS2L flying boat (G-CYBA).

Forest Inspector Cameron would again join Major MacLaurin, Tuesday, 12 July 1921, on an HS2L flying boat flight from Jericho Beach to Kamloops passing over the Coquihalla Pass, and passing over the east end of Fish Lake, at 10,000 feet, nearing 5:45 p.m., before descending to the waters of the Thompson River at Kamloops. This flight is marked as the first non-stop flight between Vancouver and Kamloops, and the first flight of a seaplane across the coastal mountains to the B.C. interior.

Inspector Cameron was also flown over areas of the B.C. Interior, later in the Summer 1921, by Canadian Air Board pilot Earl Leslie MacLeod, possibly in the HS2L flying boat (G-CYEB).
In July 1928, Mr. Cameron was assistant director of forestry, at Ottawa, when he and his wife passed through Kamloops on their way to a British Empire Forestry conference in Australia and New Zealand.

Mr. Cameron would again visit Kamloops, in June 1933, in the matter of Dominion make-work relief projects, caused by the depression.

Posted by Lac Le Jeune Community at 12:42 PM No comments:

Posted by Lac Le Jeune Community at 12:42 PM No comments:

The Logan Lake Home Show is this weekend!

There’s no entry fee but visitors are encouraged to bring along donations of canned and boxed food products for the Logan Lake Food Bank.
Posted by Lac Le Jeune Community at 9:40 AM No comments: